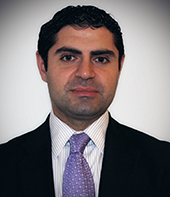 John Hindo is one of the founding partners of Mekani, Orow, Mekani, Shallal & Hindo, P.C. John concentrates his practice in the areas of real estate and business transactions, commercial litigation with a focus on liquor license litigation and loan workout/debt negotiations.

John has considerable experience in representing clients in all facets of business and real estate including real estate developments, drafting and negotiating buy-sell agreements, corporate formation, and obtaining loans. John also has considerable experience dealing with lenders on behalf of consumers in negotiating commercial loan modifications, short sales, deeds in lieu of foreclosure and other creative methods to provide for debt relief. He has also successfully defended and litigated many matters involving the Michigan Liquor Control Commission.

John has a Bachelor of Science Degree in Finance from Wayne State University and a Juris Doctorate from University of Detroit Mercy Law School. He is also licensed realtor. He is a member of the State Bar of Michigan, Chaldean American Bar Association, Chaldean American Chamber of Commerce, and Metropolitan Consolidated Association of Realtors. He is admitted to practice in the State Courts of Michigan and the United States District Court for the Eastern and Western District of Michigan.